The exact origin of Shakshuka is unclear with some food historians claiming its roots to be North African (specifically Tunisian) and others source it back to Yemen, either way it has come to be loved across Israel, Egypt and the Middle East. It's always been known as an affordable dish using just eggs, poached in a delicious stew of vegetables and bread for dipping in the tomato sauce and soft, runny egg. The name translates as 'shaken' or 'mixed up' which describes the way everything is chucked into the pan and given a little stir occasionally as it simmers away on a low heat. Traditionally the dish is cooked and served in the same iron pan with no other dishes needed making it a low-fuss favourite for outdoor breakfasts and light dinners. 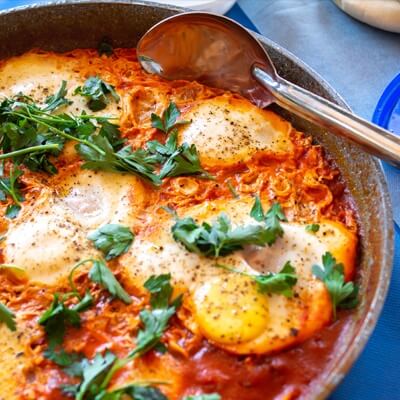 Slow Cooking - Learn how to make this thick and spiced brunch dish, controlling your pan and poaching the eggs on a low and slow heat to open up the flavours. 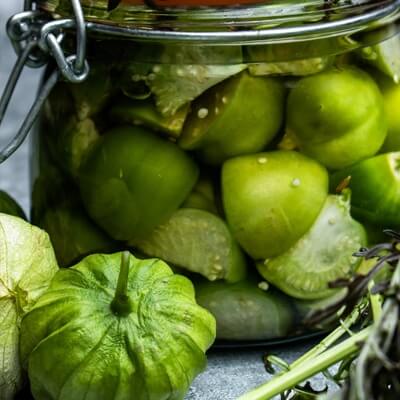 Pickling - Learn about pickling in this recipe, using this quick technique to balance the flavours of this rich dish. 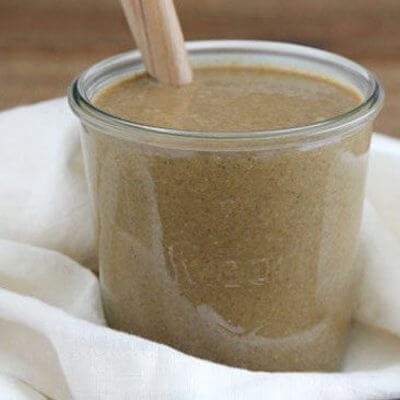 White Tahini - A staple of Israeli cuisine, master this sauce which will feature across the whole course.

To start, take your beautiful red peppers and remove the outer flesh with your knife leaving the core, seeds and stalk behind. Remove any of the white pith and then slice the pepper lengthways. Clean any seeds away that have been left on your board and get to work on the garlic. Peel the garlic and leave the cloves to one side.

Now, moving over to the stove, put a large heavy frying pan on high heat and drizzle a generous helping of vegetable oil. Add in your peppers along with a pinch of salt and move them around the pan covering them in the oil evenly. Leave for roughly 20 minutes.

Moving onto our tahini, we will need a bowl, tahini, ice cold water and of course our lemon. Cut the lemon in half taking out any pips. Now with a large spoon, spoon the tahini (which came in your specialist box) into a bowl. Add a splash of the ice cold water and juice from half a lemon and mix vigorously. Season well and you should be left with a thickened white paste. Check on your peppers, mixing them so they cook evenly.

Next thing we are going to be doing is slicing our garlic. Length ways slice 5 or so garlic cloves as thinly as possible, now move onto the Jalapeños and slice them thinly (leaving more seeds behind if you want it spicier). Have a quick clean down and go back to check on the peppers.

Moving onto the spice mix, make sure you have all your spices to one side, ready to add to the pan. While the peppers continue to caramelise and soften lets' start working on the bishbash salad. Remove the stalks from the fennel, cut in half and then remove the core. Slice the fennel (how you like) and place into a large bowl. Pick a handful of mint leaves and cut roughly, placing into the bowl with your fennel.

Now, take your peppers off the heat which should be lovely and caramelised. Add your garlic, green chillis and spices, then move back to the heat and allow the spices to open up and cook out. Wipe down your chopping board, and start cutting your grapefruit. Place into your salad bowl and leave the acid in the grapefruit to slightly cure and pickle our fennel. Wipe the board once more and move onto the next step.

To the salad, add the juice of a lemon and leave the salad to sit in its pickling juices. Move back to the stove and check on our peppers and spices. Mix the peppers and check on your pan, we are looking for the sandy slightly grainy texture of the spices to be gone and to be left with a smoother paste. Add the tomatoes and mix well, and bring the pan back to a boil allowing the water from the tomatoes to evaporate from the pan.

Put a separate pan on a low heat (without any oil) to dry toast the pine nuts and cumin seeds. Keep them moving until you can smell the natural aromas of the cumin and the pine nuts have turned golden brown.

Into our shakshuka, take a tablespoon and create a well in the tomato pepper mixture and crack an egg into it. Repeat this across the pan leaving space between the eggs and allow the egg "goo" to cook into the mixture. Once all the eggs are in the pan, crumble feta onto the dish, leaving the the eggs uncovered. Season the eggs with black pepper and salt. Leave the eggs to cook (roughly 3 or 4 minutes) while we go back to our fennel salad.

So, everything is here curing in its beautiful juices, taste the salad for its seasoning and acidity. Add the pine nuts and cumin to the salad and mix well. The bishbash salad is ready to leave to one side.

Remove the shakshuka from the heat and get ready to serve.

So, we have our beautiful bishbash salad ready to serve, the shakshuka and white tahini sauce. Decant the tahini into a smaller bowl, serve the shakshuka onto a plate and then finally the salad.

Serve altogether for breakfast or brunch and enjoy!

Don't worry too much about the thickness of your peppers, keep them fairly consistent but I like to create different textures in my shakshuka.

Known as Capsicums, peppers are loved all around the world for their versatility and sweetness. Fully ripened red peppers are full of vitamin C, the ripening process sees the disappearance of the chemicals that make the younger green peppers more bitter.

Always keep an eye on the peppers while making your tahini, we need to keep them moving so they cook quickly and evenly.

Nut pastes can be made from all dry and fatty nuts if they are ground in a pestle and mortar. Tahini is made from ground sesame seeds and is loved across the whole of the Middle East, typically they are around 50% oil by weight and toasted for 5 minutes 120-150°C (to bring out that nutty flavour).

There is no exact science to making tahini sauce but there's definitely rules to stick to! Always use lemon and always use ice cold water. With the water, add a small amount to begin with, adding further gradually until you have a consistency you are after.

When you begin to mix your tahini it'll look slightly strange or split. Don't worry, keep whisking and it'll come back together to an incredibly smooth paste. If you want to thicken your tahini back up, add some more of the raw paste to your mixture and mix well again.

The story of spices is a colourful one. Originally tropical Asia was rich in spice plants unlike the rest of the world. Europe at the time mainly used spices such as pepper until the Arab traders from the Middle East introduced further varieties and cultural influences to their tables.

The word spice comes from the latin word species which means "kind of merchandise". Generally spices are made from seeds, roots or bark (robust materials) that originally traveled well.

Fennel is a bulb like vegetable that has tightly wrapped layers, stalks (much like a celery stalk that remains tough and fibrous) and also delicate fronds (which are a great substitute for dill). The anise aroma comes from the chemical anethole that also flavours spices such as star anise.

With my Bishbash salad I like to keep my salad rustic, don't worry too much about the thickness of the the vegetables and herbs. Cut it how you wish!

Keep an eye on your peppers throughout this whole process.

When adding your ground spices to the pan, balance the flavours as you wish and to your taste.

Like the fennel, cut your grapefruit rustically creating different textures and mouth feel.

In this recipe we create a pickle with lemon and grapefruit. This ancient technique of adding acidulation is much quicker than fermentation and gives us much greater control over, flavour, texture and salt content. The addition of sea salt will aid the texture of the pickle and with the calcium and magnesium impurities present they help reinforce and cross link the pectin walls in the vegetable.

Feel free to taste your spices at this stage for the texture of the grounds. It should be almost melt in the mouth and smooth.

Toasting nuts and spices in a dry pan will release all the natural oils and also intensify the flavour, keep in mind that the spices and nuts will continue to toast as long as they are in the pan due to the residual heat, If your pan is too hot tip the contents onto a clean plate.

Leaving plenty of space between the eggs will allow them to cook evenly and not join together while cooking. It will also allow us to portion the recipe more easily for plating.

Eggs are incredibly versatile and used all across Israeli cooking. An egg is full of rich fats, proteins, vitamins and minerals.

When cooking eggs, the heat solidifies the liquid. Egg proteins begin as folded chains of amino acids, as they are heated the increased motion begins to break the bonds and the chains unfold. The unfolded proteins then begin to bond to each other resulting in a network of long molecules.

The bishbash salad is the perfect dish to serve alongside our shakshuka, the acidity of the salad helps cut through the richness of the sauce and also the fattiness of the egg.

Serve this for breakfast or brunch, taking large amounts of tahini to your shakshuka and using your citrus salad to cut through the richness of the egg and tahini. 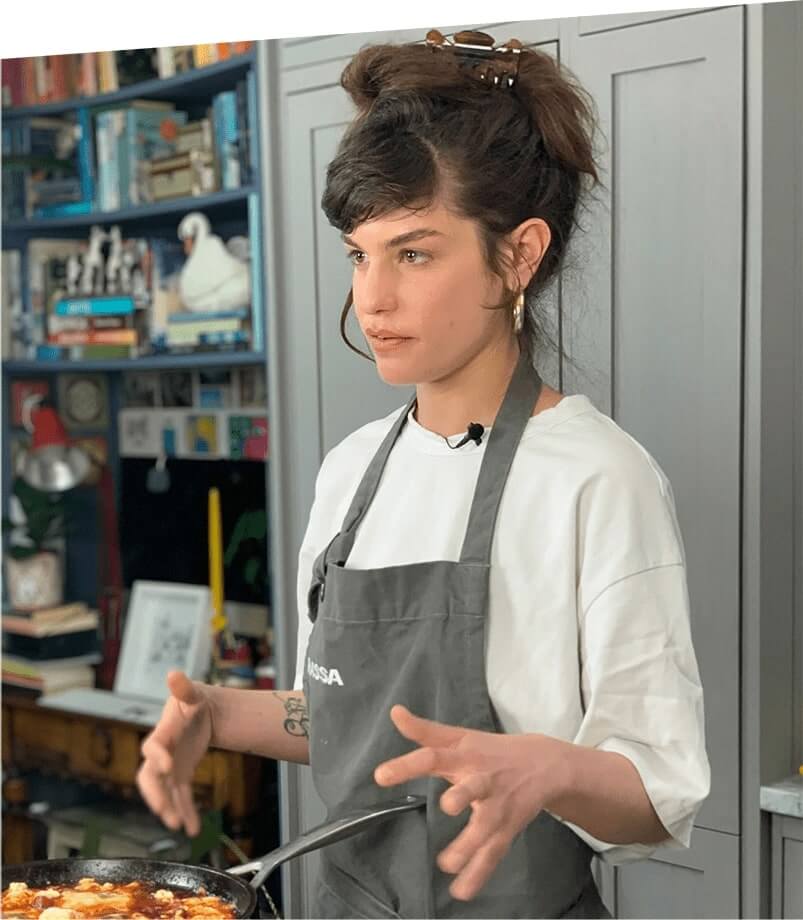