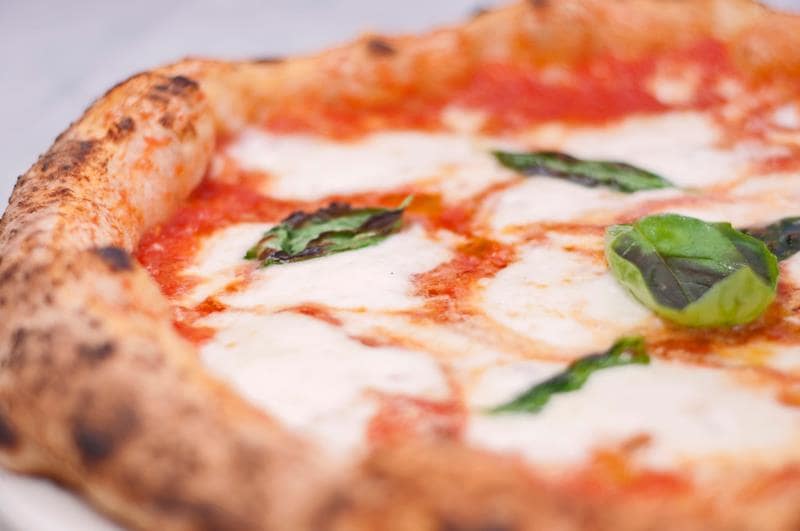 There's No Topping This: The Incredibly Strict World Of Pizza Napoletana

From it's humble origins to its high class patrons, we take a look at what (and who) makes Neapolitan Pizza so special!

In the chaotic heart of Naples, silence is a rare commodity. Every inch of the tangled web of narrow streets hums with people busily going about their day.

Mopeds beep their horns. Families call from balcony to balcony. Street sellers shout out deals on their produce.

But when it comes to Pizza, Naples’ most treasured export, everybody shuts up and listens to one influential organisation:

Ashes to Ashes, Crust to Crust

Before we expose any more about the inner workings of this shadowy cabal, we need to take a look back at the path Pizza has taken to reach its (supposed) perfect form.

Historians believe this famous Italian food has its roots in the Middle East, with flatbreads becoming popular amongst Roman soldiers. But it wasn’t until A.D. 997 that the name “Pizza” was attributed to the doughy disc, as it became increasingly popular across the midland and southern reaches of Italy.

Cooked in wood burning communal ovens, these early pizzas were traditionally eaten by the poorer classes, as they were quick and cheap to make. But as is often the case, the landed gentry started to get jealous of what their subjects were eating…

Arguably the oldest style of pizza Napoletana that’s still served today is the Pizza Marinara. The name actually comes from the Italian word for the wives of sailors, as it was often the meal they made before their husbands went to sea.

But by the 19th century, pizza had become so popular that specialized chefs, known as Pizzaiolo, began dedicating their lives to the craft. And in 1889, as a sign of how far the peasant food had progressed, a chef by the name of Raffaele Esposito prepared a pizza for the Queen of Savoy. He designed it to represent the colours of the flag:

Named after its royal recipient – the ‘Margherita’ was born!

Back to the Sauce

Given the historical importance of pizza to the Neapolitan identity, some groups started to raise concerns that the quality of their pies was beginning to drop. That is, until 1984, when one brave Neapolitan by the name of Antonio Pace had seen enough…

“Pizza isn’t simply a product” he says, “It is a philosophy of life!”

He saw the classic Italian meal as a heritage symbol that needed to be protected at all costs, and set about drawing the guidelines for his newly founded organisation.

The Associazione Verace Pizza Napoletana (or True Neapolitan Pizza Association) grew and grew, and as of today stands as a formidable force in the culinary landscape of Italy.

Pizzerias across Naples and the wider Campania region all sought the AVPN’s seal of approval. They knew that, in some cases, their livelihood depended on gaining certification from Antonio and his pizza pardoners.

All he required from the local Pizzaiolo to “contribute to the image of Naples”, was total loyalty to his code of the crust…

Unlike the pizza’s crust, the guidelines for making the true Napoletana product are far from flexible. Included on UNESCO’s list of intangible cultural heritage, the Pizzaiolo must adhere to the letter of the law.

The crust must be made of Italian double zero flour, be no more than a third of a centimeter thick on the base, and 1.5cm on the crust. Crucially these laser precise measurements must be produced solely by hand (even a rolling pin is considered machinery).

Moving on to toppings, the only choices afforded are San Marzano tomatoes grown on the slopes of Mount Vesuvius, Fior di latte mozzarella from the farms of Agerola, Buffala mozzarella from the marshlands of Campania, Basil, olive oil and (if you’re lucky) a light grating of Parmiganio Regiano. End of list.

The pizza is then placed into a 485 °C wood-fired oven for 60-90 seconds, after which the blistered, bubbling beauty is retrieved and ready to remove the skin from the roof of a lucky patrons mouth.

Any deviation from these rules, and you’ll have Antonio to contend with…

From Naples to Niagara

Although it’s tempting to poke fun at an organisation like the AVPN, their message is underpinned by an ethos of genuine passion for food.

Every Pizzaiolo is free to pay homage to Antonio’s Church of Chew if they want to, just as they’re well within their rights to ignore it as outdated snobbery.

But no matter how you cut it, pizza Napoletana has undoubtedly transcended the bustling streets of its hometown. From Japan to Brazil, over 600 restaurants around the globe are now certified members of the Associazione.

Just don’t ask them to make you a Hawaiian…

November 17, 2022
·
4 mins
Other Articles
The meat lover’s guide to eating just a little bit less meat
Ideas For Home
·
8 mins
Spiced Date Butter Recipe
Ideas For Home
·
1 minute
How to Make Chocolate Truffles at Home
Ideas For Home
·
2 mins
Rise and shine: Three different ways of leavening dough
Ideas For Home
·
4 mins
Thinking about starting a side hustle or creative business? Here’s why you should start now.
Business
·
5.5 mins
Stay Connected
Thank you! Your submission has been received!
Oops! Something went wrong while submitting the form.
ABOUT US
About UsArticles
PROGRAMS
All ProgramsTeach on RassaRefer FriendsSuggest Program
SUPPORT
For BusinessesContact UsTerms of ServicePrivacy
Copyright © 2022 Rassa Technologies Limited