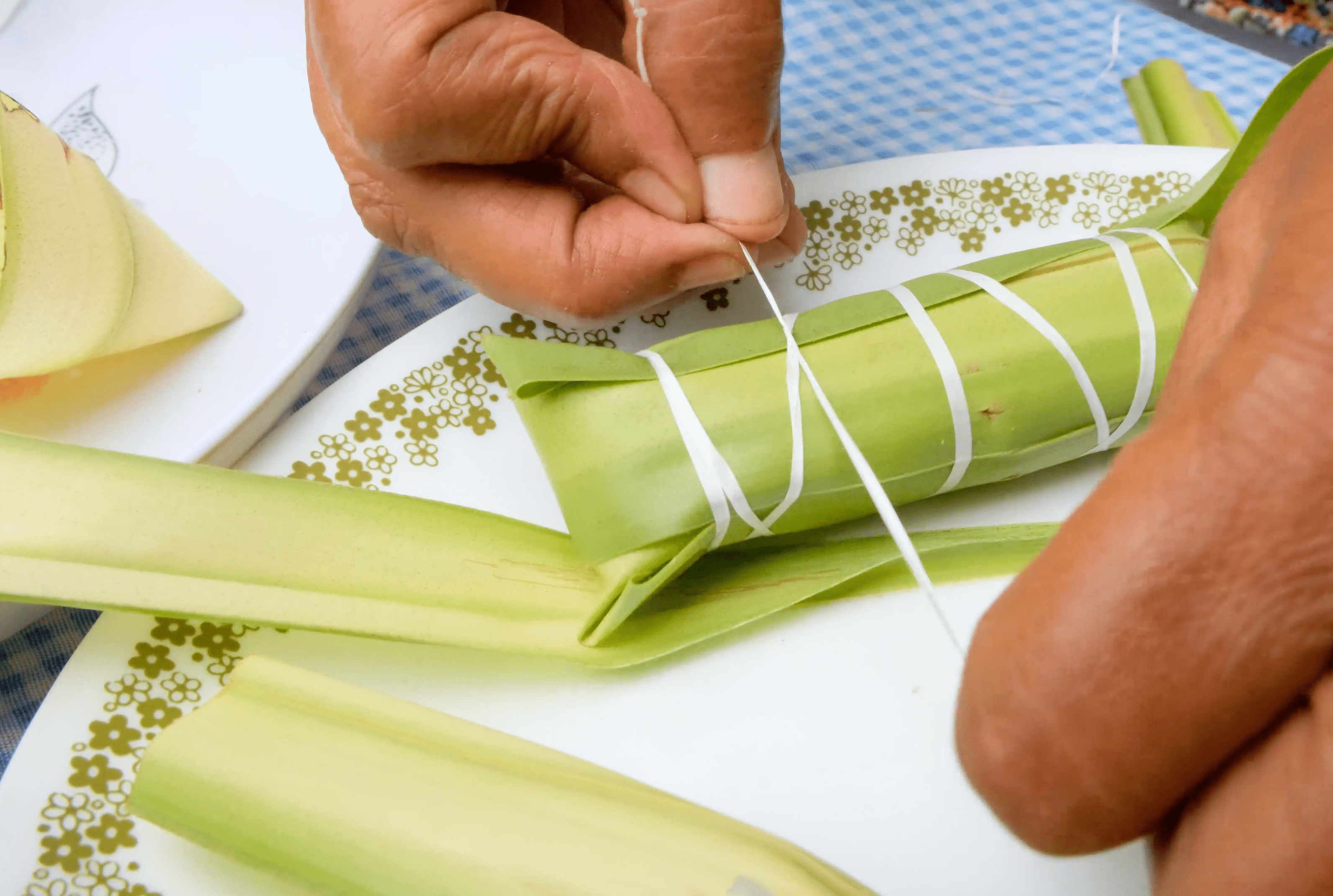 Rice is a Filipino staple in savoury dishes as well as sweet desserts and sticky snacks like rice cakes - a popular one being suman.

It’s no secret that rice grows abundantly in the Philippines. As the Filipinos’ main source of energy, rice is presented in all shapes and forms in the country’s colourful cuisine. The staple starch is used in savoury dishes as well as sweet desserts and sticky snacks like rice cakes—suman, a popular treat seen all over the country’s 7,000-plus islands, falls under the latter.

It’s said that Filipinos have been making rice cakes for years before the Spanish conquistadors took over Philippine lands as an offering to their idols and a gift for foreign visitors. In his journals chronicling the Spanish expedition to the archipelago, Historian Antonio Pigafetta described suman as “rice cakes wrapped in leaves, with somewhat longish pieces.”

In its simplest form, suman is mainly made from glutinous rice and coconut milk that are traditionally steamed and wrapped in either buri palm leaves or plain banana leaves. Although it is common to include sugar in the mixture, adding sugar to the sticky rice mixture is entirely based on the cook’s preference as some people like to eat their suman alongside already-sweet condiments such as brown sugar, yellow mangoes, latik (toasted coconut milk curds), caramel, or even chocolate sauce.

The unique art of wrapping suman is a well-kept tradition that spans over decades. Some believe that the technique traces back to pre-colonial Indian influences as early as the 10th century. Meanwhile, suman wrapping styles vary from region to region, from simple, rectangular folds to more complex ones resembling geometric patterns like a heart or star.

Like wrapping techniques, there are multiple kinds of suman, which also change depending on the province that you visit. Antipolo, a city east of Manila, is home to one of the most ubiquitous types of suman called “suman sa ibus.” This particular kind uses glutinous rice with salt and coconut milk and is steamed with water mixed with turmeric that stains palm leaves into its distinctive yellow colour.

In Samar, a province in the Philippines’ Visayas region, they are known for their native delicacy called “suman moron.” The sweet rice cake is likewise wrapped in banana or anahaw leaves and made with real cacao or sometimes store-bought chocolate. On the other hand, there are also suman that aren’t made from rice. “Sumang kamoteng kahoy” uses grated cassava, a type of root vegetable, instead of grains.

Every New Year, superstitious Filipinos believe that the presence of sticky food like rice cake are essential for good fortune to stick throughout the year. Nonetheless, it’s still pretty common to have suman and other rice cakes on the dinner table nowadays during the holiday season in the Philippines.

Filipino food historian Doreen Gamboa Fernandez said, “It is as if our forebears, dependent on rice as a staple and year-round pampabigat sa tiyan (tummy filler), gratefully gave it primacy of place in the celebration of native Christmas.” As long as rice is a staple, the presence of rice cakes will continue to stick to the Filipino palate for generations to come.

August 10, 2022
·
3.5 mins
Other Articles
Manna From Heaven: What Makes Challah So Special?
Food Cultures
·
2.5 mins
From Bean to Bar: How to make your own chocolate at home
Ingredients
·
3 mins
The Emerald Isle... once again?: Ireland's steps to rewilding
Food Cultures
·
4 mins
Tradition! Tradition?: Why Many Jewish People Eat Chinese Food For Christmas?
Food Cultures
·
2 mins
Conversations with a World Central Kitchen volunteer in Ukraine
Interviews
·
4 mins
Stay Connected
Thank you! Your submission has been received!
Oops! Something went wrong while submitting the form.
ABOUT US
About UsArticles
PROGRAMS
All ProgramsTeach on RassaRefer FriendsSuggest Program
SUPPORT
For BusinessesContact UsTerms of ServicePrivacy
Copyright © 2022 Rassa Technologies Limited