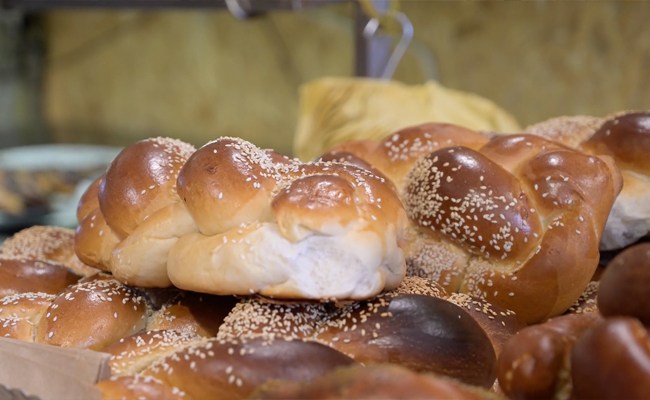 Manna From Heaven: What Makes Challah So Special?

Challah is both a source of spiritual remembrance and physical nourishment in the Jewish community. If you haven't already, try out Chef Eyal's version.

As part of the Goyim, I was first introduced to Challah by a university housemate, who upon returning from a visit home, produced a shimmering braided loaf from the bag of groceries she brought back with her.

Growing up in a Jewish family, she was amused by our curiosity with the bread - but to be honest, can you blame us?

With a slightly sweet brioche-like flavour, and the appearance (and texture) of a Looney Toons cloud, it soon became the first thing we asked about each time she returned - and being the generous soul she was - brought more and more loaves back with her each time.

Truly a house full of converts, we all realised that any sandwich, meal or midnight snack was elevated to new levels with a slice of this gifted loaf - that is until one bacon sandwich was made by an absent-minded housemate and we briefly lost Challah privileges...

We were told we needed to have a Shabbat dinner as a house, and learn a bit about the bread before we could continue ravenously tearing apart loaf after loaf.

While the name ‘Challah’ has come to mean any sanctified bread consumed during Shabbat, the term actually comes straight out of the scrolls of the Torah.

It is said God instructed Moses to donate part of every loaf to the local Jewish priests as an offering, and the Challah is the ‘Manna’ or ‘bread from heaven’ passed down to the chosen people.

Today, bakers of Challah still provide an offering - but the practice has become more ceremonial than literal. A small section of dough is baked to cinders, and once the smoke clears, the much more elaborate loaf is baked to golden perfection.

The actual practice of separating the dough became known as ‘taking the Challah’, and it is this sacrificial process, of calling back to the scripture, that gives the bread its holy status.

Not only this, but once the loaf has proved and been braided, the 12 ‘humps’ of the Challah are meant to represent the 12 tribes of Israel.

Today, all across the country, bakery windows are filled with the beautiful loaves made of up to 6 strands of dough woven together and topped with sesame, coriander or poppy seeds.

Jewish diasporas around the world are known for their close knit families, strong sense of community, and respect for heritage - and one of the pillars of this culture is the Sabbath, or Shabbat dinner.

Families come together to honour the day of rest and meals can often fall on the Friday evening, or afternoon of the Saturday.

The Shabbat dinner can vary in shape and size, but the same types of food (and bread) usually make an appearance.

Gefilte fish, roast chicken, soup and matze balls are all commonplace, but arguably the star of the show is the Challah. The loaf is covered by a ceremonial piece of material - or in the case of our university house - our last clean tea towel.

As the sun went down, and we took our places round the table, my housemate said a few words before we ate.

Uncovering the Challah from its red and white checked hand towel, we looked at the loaf with new eyes - almost the same way we had when she first brought it home.

And in the candlelight of our first Shabbat dinner, we broke bread and enjoyed our meal in a way befitting the food we were eating.

November 17, 2022
·
4 mins
Other Articles
Open Sesame - The Importance of Tahini in Israeli Cooking
Course Specific
·
2.5 mins
The Best Winter Plants You Can Eat
Ingredients
·
3 mins
'I Was Roughed Up By The KGB, But Food Saved Me': Darra Goldstein Talks Cuisine Behind The Iron Curtain
Interviews
·
4 mins
The Science of Souring
Course Specific
·
7 mins
The World's Oldest Chinatown
Course Specific
·
3 mins
Stay Connected
Thank you! Your submission has been received!
Oops! Something went wrong while submitting the form.
ABOUT US
About UsArticles
PROGRAMS
All ProgramsTeach on RassaRefer FriendsSuggest Program
SUPPORT
For BusinessesContact UsTerms of ServicePrivacy
Copyright © 2022 Rassa Technologies Limited