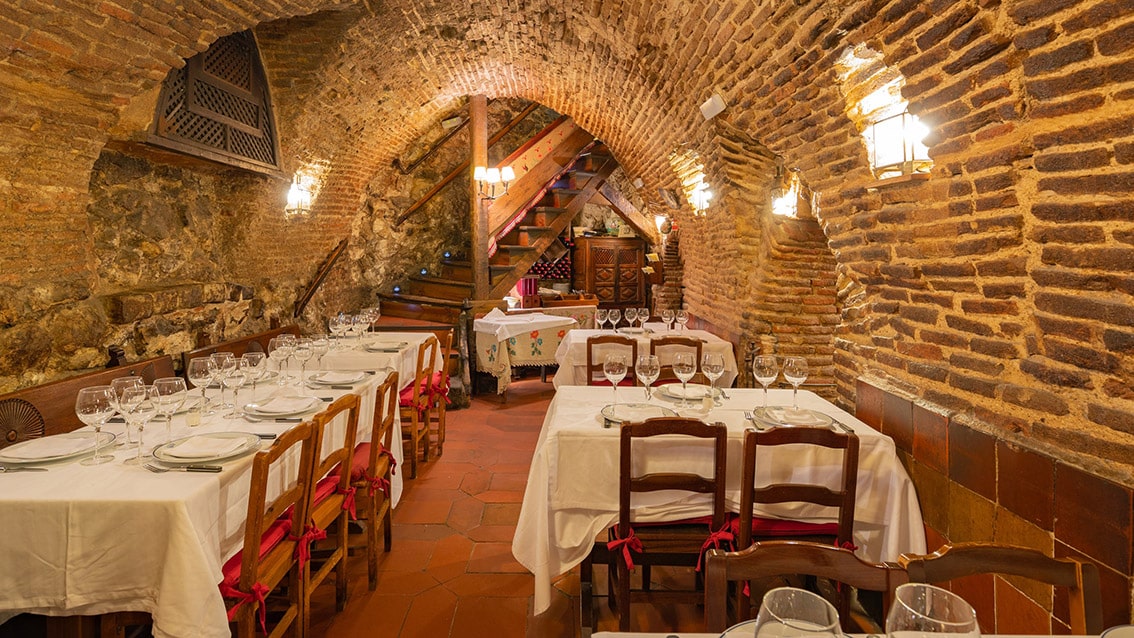 Read about the world's oldest restaurant, it's history, and celebrity clientele. But could its historic status be under threat?

While many restaurants come and go, Botin's is no flash in the pan! We take a look inside the classic Spanish eatery that holds the record for the world's oldest restaurant, and reveal why that historic status may be under threat...

Since 1725 the chefs of El Sobrino de Botin, the world’s oldest restaurant, have worked tirelessly to feed their hungry customers. But with this Hindenburg/Titanic/Game of Thrones season finale of a year we are currently experiencing, could this record holding establishment be under threat?

As you walk through the varnished wooden doors, typical of the Madrid Old Town, a member of staff ushers you down a winding brick staircase. The spiralling tunnels taking you deeper and deeper under the cobbled streets above. But just before your claustrophobia has a chance to set in, the ceilings open out into what appears to be a cavernous old wine cellar.

However, instead of rows of Rioja, you are greeted by neatly made tables. Their crisp white tablecloths patiently waiting for the first spill of the day from an overzealous eater.

As you take a seat, the room fills with the sweet aroma of roasting pork emanating from the kitchen next door. From your table you catch a glance of the chefs busily reaching in and out of the giant stone oven, worn down and grooved from years of use. 295, to be exact.

This image has been the same since before George Washington crossed the Delaware, Watt invented the steam engine and Mozart tickled the ivories.

The Best Cochinillo in Madrid

Ironically, this typical Castilian restaurant was actually founded by a Frenchman called Jean Botin. Upon his death it was passed down to his nephew, when it gained its current name.

Having only changed hands once more since it first opened, this eatery has been run by three generations of the Gonzalez family, who are firm believers in the old ways being the best.

The roasted suckling pig, or ‘Cochinillo’, is their signature and is a quintessential dish of the Castille area. Just as they did three centuries ago, the chefs prepare the pork with Thyme, Bay, white wine, onions and salt.

The end result is incredibly succulent, tender meat you can cut with a fork, surrounded by a crunchy glass-like skin – roasted to perfection in the cooking juices.

It wouldn’t be outlandish to say Botin’s has served millions of customers throughout its history. So it's not surprising some famous faces have cropped up over the years.

Neil Armstrong was over the moon with his cochinillo…

Robert De Niro was made a meal he couldn’t refuse…

But arguably their most cherished patron was the great novelist, Ernest Hemingway. The Nobel Prize winner regularly ate at Botin’s throughout the 1920s while he was writing The Sun Also Rises. He went on to include it in a passage of the book:

“We lunched upstairs at Botin’s. It is one of the best restaurants in the world. We had roast young suckling pig and drank rioja alta”

Not a bad bit of advertising eh? Botin’s returned the favour giving their writerly regular his own table, and preferential treatment from the staff!

The Impact of Covid

Having kept its doors open throughout the Spanish Flu of 1918 and the Civil War of 1937, the most fateful year of Botin’s history has undoubtedly been 2020.

The coronavirus has had a huge impact on the culinary world, and even the world’s oldest continually running restaurant has felt the heat.

Given that Spain was one of the hardest hit European countries in the first few months of the outbreak, their lockdown measures were severe. So for the first time in nearly 300 years the original stone ovens went cold, and service stopped.

While Botin’s did reopen after several months, managing to retain their record holding title, their service is seriously limited. Owner Antonio Gonzalez said that at their peak they were used to 600 covers a day, but due to social distancing they were lucky to manage 60.

No one knows what the future holds for this historic establishment and the restaurant industry at large, but I’m sure we could all do with some comfort food right about now – roast pork anyone?

November 17, 2022
·
4 mins
Other Articles
On a career break or sabbatical? 10 things to do with time off work
Business
·
6.5 mins
The Ultimate Guide to Different Types of Beef Steak
Techniques
·
16 mins
Why adobo is the most-talked about Filipino dish right now
Course Specific
·
2.5 mins
Irish Seaweed: From Famine Food to Foraged Delicacy
Course Specific
·
2 mins
The Future of Online Learning
Business
·
7 mins
Stay Connected
Thank you! Your submission has been received!
Oops! Something went wrong while submitting the form.
ABOUT US
About UsArticles
PROGRAMS
All ProgramsTeach on RassaRefer FriendsSuggest Program
SUPPORT
For BusinessesContact UsTerms of ServicePrivacy
Copyright © 2022 Rassa Technologies Limited