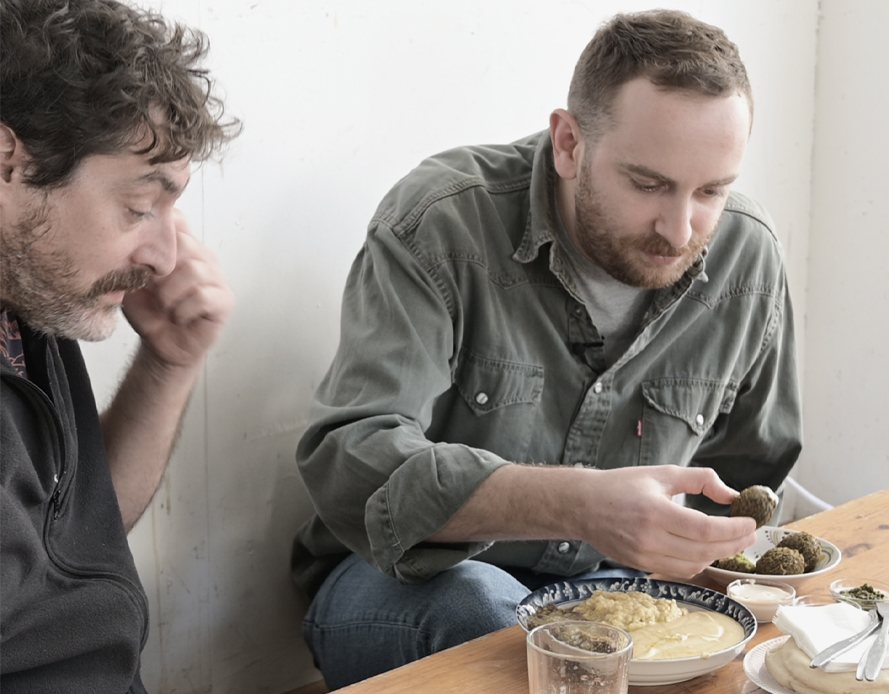 What is 'Israeli food'?

We're highlighting the origins of dishes eaten by Israelis - a population of people with a complex mix of cultures and a hugely diverse heritage from the Jewish diaspora and Arab world - giving respect to the roots and journey these ingredients and dishes took to get to the Israeli kitchen table.

Dishes found in Israel have recently been popularised across the western world. In amongst the ‘trends’ of hummus, charred aubergine and za’atar breads, a key part of the story of these popular dishes has been left out of food media. This course will be highlighting the origins of dishes eaten by Israelis - a population of people with a complex mix of cultures and a hugely diverse heritage from the Jewish diaspora and Arab world - giving respect to the roots and journey these ingredients and dishes took to get to the Israeli kitchen table. Tracing these dishes back is a complicated and messy task and there will be a case to be made for multiple origins, since they appear in various forms across modern country borders throughout history. The makeup of Israeli society is often misunderstood, seen as largely Ashkenazi but in fact what you see are Arab and Jewish traditions which have a long history of being woven together. In the making of this course we had the pleasure of speaking with Israelis whose heritage spans Russia, Palestine, Iraq, Poland, Greece…to name a few!

A short intro to the history

The Ottoman Empire was already in decline at the start of the First World War but following heavy military casualties, in 1922 it officially ended and the last remaining Ottoman territories were divided between Britain, France, Greece and Russia. The aim of this was to liberate the people in those territories from the oppression of the Ottoman Empire, ruling until the time came where they could stand on their own. Britain had control over areas between the Mediterranean Sea and the River Jordan, Jordan itself and southern Iraq but where it gets messy is the drawing of state boundaries were left up to the controlling powers - the consequences of which are still felt in conflicts today.

Rewinding to the pre-War years, there was growing anti-semitism in Europe which affected the ability and desire for Jewish people to assimilate into Western society. The Zionism movement, support for the establishment of a national sovereign identity for displaced Jews, was growing as Jewish people were looking for greater security. There were different views within the movement of where they should establish themselves - Uganda being one of several other proposed locations. However, the most influential type of Zionism believed in a religious homeland in the Middle East, specifically Palestine, citing ancient, sacred sites referenced in the Jewish holy text, the Torah. Despite disagreements within the movement, there were early waves of Jewish immigration into Palestine. After the Second World War, there was widespread sympathy for victims of the Holocaust, the Zionism movement was at a height, and the British government at the time created a Jewish national home in Palestine. This is just the start of what has been a turbulent and war-stricken history between Israel and Palestine.

So why have we put this course together?

As Anthony Bourdain said himself, Israel is easily the most contentious piece of real estate in the world and there’s no hope, none of ever talking about it without p*ssing somebody if not everybody off, but at Rassa we strongly believe in an exchange of conversation, even if uncomfortable, over something that connects us all - food. So with the intention of focusing on the people and not the politicians, we wanted to share the stories, culture and food of Tel Aviv and Israel with you.

You’ll hear from the likes of Hadas (Jewish-Israeli) and Nadia (Palestinian-Israeli) from Sindyanna of Galilee who produce the olive oil in your specialist ingredients box. They run a non-profit organisation led by a team of Arab and Jewish women working to create social change from the ground up. You’ll also be guided around Tel Aviv, home to a diverse mix of people who have brought with them their delicious food cultures to Israel. Also our wonderful team of chefs, will share with you techniques and stories behind the ingredients you’ll be using to create a delicious array of dishes, giving respect to their origins.

The changing face of the food landscape

Food says a lot about the nuances of history and culture and it is important to remember food cultures are living and constantly subject to change. In 1948, when modern-day Israel was established, you saw culinary influences from Central and Eastern Europe  from displaced survivors of the Holocaust as well as influences from Jews who had immigrated from all over the Middle East and North Africa. With each of these ethnic groups, came different styles of cooking and ingredient tastes. After improvements to water sources, the population were turning more towards agriculture and cooking with ingredients from the native land. As the population of Israel has changed over the years, so has culinary tastes for example, the European Jewish preference for plums and cherries, became influenced by later waves of immigration from the Middle East bringing with them a taste for the likes of olives and dates. Many say a specific ‘Israeli cuisine’ cannot be defined since it has evolved out of a wandering population but perhaps that’s what is identifiable in itself, a collection of dishes which have taken influence from the world over, adapted to the local climate and land.

August 10, 2022
·
3.5 mins
Other Articles
Tradition! Tradition?: Why Many Jewish People Eat Chinese Food For Christmas?
Food Cultures
·
2 mins
Big Vitamin D Energy: Which Foods Have Vitamin D?
Ingredients
·
2.5 mins
Your Senegalese Shopping List: Top 10 Traditional Foods Of Senegal
Ingredients
·
3.5 mins
The Green Nut: A brief history of the Pistachio
Ingredients
·
3 mins
Heirloom Seeds Are Making a Come Back in the Food World
Ingredients
·
3 mins
Stay Connected
Thank you! Your submission has been received!
Oops! Something went wrong while submitting the form.
ABOUT US
About UsArticles
PROGRAMS
All ProgramsTeach on RassaRefer FriendsSuggest Program
SUPPORT
For BusinessesContact UsTerms of ServicePrivacy
Copyright © 2022 Rassa Technologies Limited