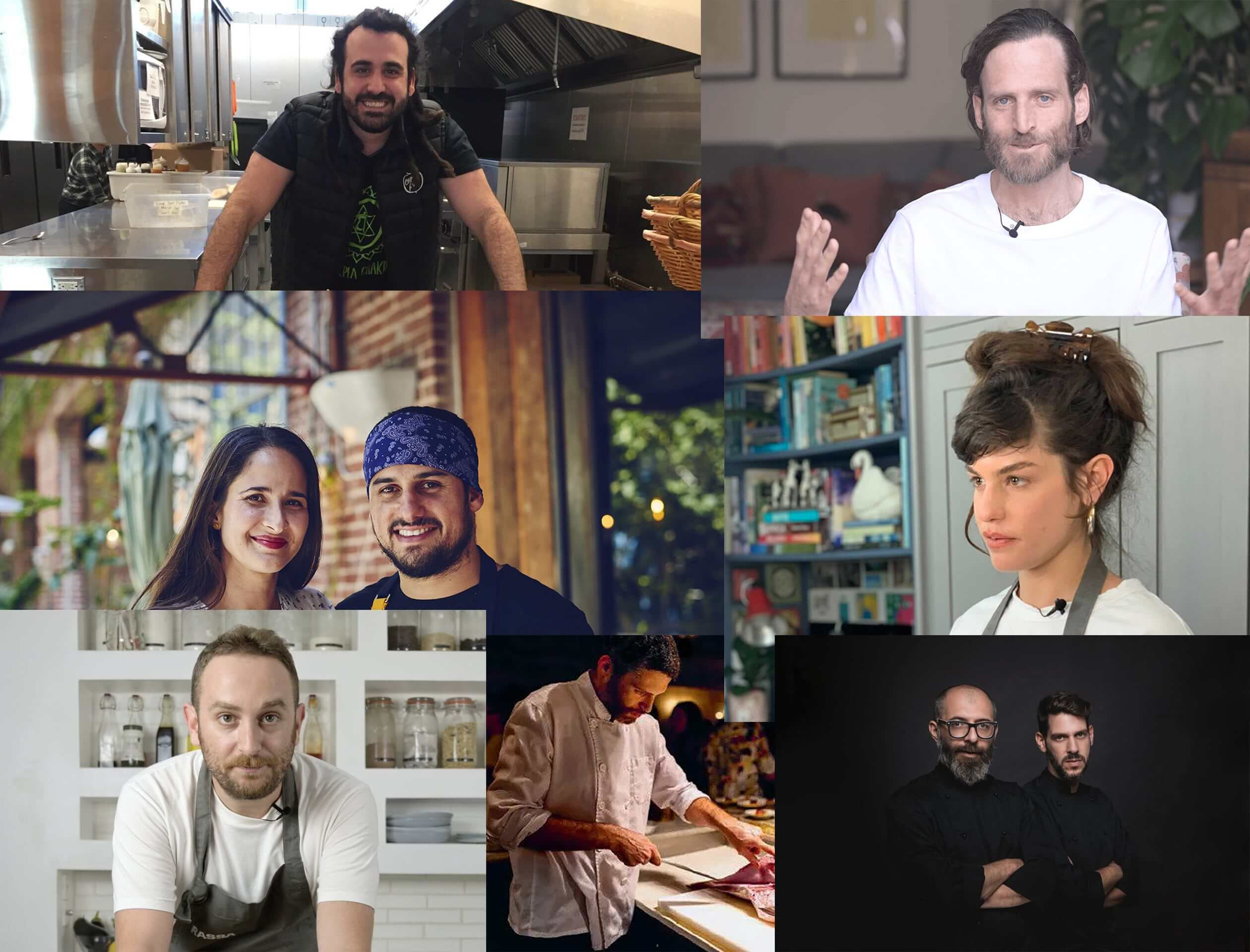 We've listed some of the best Israeli chefs we've been following and where you can find them cooking up some of their best dishes around the world.

In the past decade, the Israeli food scene has exploded in popularity around the world, with an abundance of delicious restaurants, markets, and pop-ups that are rich in both flavour and culture. The chefs behind these dining experiences work to blend the essence of authentic Israeli cuisine with the vibrance of diverse cities globally.

Keep reading to learn more about the Israeli chefs leading this movement!

Chef Tomer Hauptman is certainly not short of experience -- he has worked as the head chef of Mr. Porter in Amsterdam and The Palomar in London, and is now taking his talents to the woodlands, where he is cooking as a part of an outdoor dining experience with Nomadic.

Hauptman’s appreciation for Israeli’s cuisine started from memories of growing up with his Romanian grandmother’s Jewish Ashkenazi and Middle Eastern dishes. Furthermore, his cooking is inspired by the food culture in Israel that you can’t find anywhere else.

Working with Rassa chefs Eyal Jagermann and Zoe Tigner-Haus at ANAN, Tomer’s aspirations are to bring the same Israeli dining experience to London without sacrificing the grab-and-go element that he loves about restaurants in Israel.

Driven by the hustle and cultural melting pot of Israel, chef Eyal Jagermann brings with him the high standards of food, hospitality, and atmosphere of Israeli cuisine to London.

Born in Israel of Austrian descent, Jagermann grew up experiencing the foundations of Israeli cuisine; the culmination of Middle Eastern, Arabic, North African, and Asian foods made him fall in love with restaurants and good food.

Jagermann moved to London to study culinary management and entrepreneurship at Le Cordon Bleu, and soon found his way into The Palomar team. After gaining experience in one of the top restaurants in London, he founded The Barbary. In 2020, Jagermann teamed up with Tomer Hauptman and Zoe Tigner-Haus to launch ANAN, an immersive culinary experience centered around the universality of hummus.

Chef Zoe Tigner-Haus grew up surrounded by the Tel-Aviv markets and produce, and the freshness and adaptability of Israeli cuisine is something that she wants to share with the world.

Zoe first started working in hospitality at 18 years old at the famous Cafe Puaa in Jaffa, as well as other restaurants in Tel-Aviv, before moving to London.

Chef Zoe truly started appreciating the culinary arts and the impact of ingredients while running the front-of-house operations at The River Café, an innovative seasonal Italian restaurant. From there, chef Zoe joined Tomer Hauptman and Eyal Jagermann in starting ANAN, where she shares her skills with dishes surrounding hummus with hungry Londoners curious about Middle-Eastern cuisine.

After giving up a career in PR and marketing in Tel Aviv and Amsterdam, Oz Ben David moved to Berlin where he met Palestinian chef Jalil Dabit. From there, the two opened the vegan-vegetarian, Israeli-Palestinian restaurant Kanaan.

For them, grassroots social activism and coexistence is the main vision behind their food. For both, food was always a platform for peace and their dishes show just that. The 'Hamshuka' for instance, combines chef Dabit's hummus, which has been a family tradition for 400 years, with the shakshuka of David's grandmother.

One year after the original HaSalon was opened by Israeli celebrity chef Eyal Shani, Yuval Leshem, a young business administration student, volunteered to work at the restaurant one day a week, just as a hobby. A few months later, he was working in the kitchen regularly, and a couple of weeks turned into 5 years.

Now as the head chef at New York City's outpost of HaSalon, Leshem draws his inspiration from industries outside of food: fabrics and textures taken from fashion, the piano lessons he’s taken since a child, dance performances, and more to create a fine-dining Israeli experience.

Despite being born in Los Angeles, Ori Menashe spent most of his life growing up in Israel. At a young age, Menashe helped sell baguettes for his father's bakery, while also going on family vacations to Paris, where his parents would take him to the best fine-dining restaurants like Ducasse and Robuchon.

'Little Gourmet', as his parents nicknamed him, eventually returned to the City of Angels to pursue his dream of becoming the fine-dining chef he dreamt of as a kid. Despite dropping out of culinary school, Menahse’s hard work led to a head chef position at the Angelini Osteria and under the mentorship of Italian chef Gino Angelini, Menashe fine-tuned his trade.

In 2018, Menashe and his wife, Genevieve Gergis, opened their second restaurant, Bavel. The restaurant's dishes juxtapose the couple's Israeli, Moroccan, Turkish, and Egyptian roots in a modern twist of traditional dishes.

Born and raised in Israel, chef Itamar Shani watched his mother cook rich Israeli dishes while also visiting nearby Arab villages with his father. Seeing the conflict that was caused after the First Intifada protests and riots, Shani was inspired to create his restaurant and food truck, Chickpea, as a way to bring people together.

As an essential part of almost any Middle Eastern cuisine, Shani uses chickpeas as a way to create a plethora of other dishes influenced by these different cultures. Furthermore, as an environmentalist, Shani looks to create vegan dishes with the most authentic flavours without having to sacrifice anything. Not to mention that everything is made from scratch, whether it be the flour or homemade vegan mozzarella and ricotta cheeses.

All these talented chefs are spearheading the wave of Israeli food across the world, and if you are interested in learning more, join Tomer, Zoe, and Eyal on Rassa’s ‘Israeli Dining: Sunrise to Sunset’ course, where these three talented chefs will take you on a journey through Israel and the Levantine palate! By joining the course, you will receive high-quality ingredients hand-picked by Israeli food experts, and discover the culture through a mix of weekly classes, live chef Q&A’s and creative workshops.

November 17, 2022
·
4 mins
Other Articles
Get Ready for Christmas With These Easy DIY Decoration Ideas
Ideas For Home
·
3 mins
Streetwear - a defining sub-culture in fashion
Course Specific
·
3.5 mins
"I Couldn't Just Have A Seat At The Table, I Had To Own The Table": Alexander Smalls On His Appetite For Life
Interviews
·
5 mins
From Pad to Plate: Learn how to develop your own recipes like a chef
Techniques
·
4 mins
How to Make Chocolate Truffles at Home
Ideas For Home
·
2 mins
Stay Connected
Thank you! Your submission has been received!
Oops! Something went wrong while submitting the form.
ABOUT US
About UsArticles
PROGRAMS
All ProgramsTeach on RassaRefer FriendsSuggest Program
SUPPORT
For BusinessesContact UsTerms of ServicePrivacy
Copyright © 2022 Rassa Technologies Limited