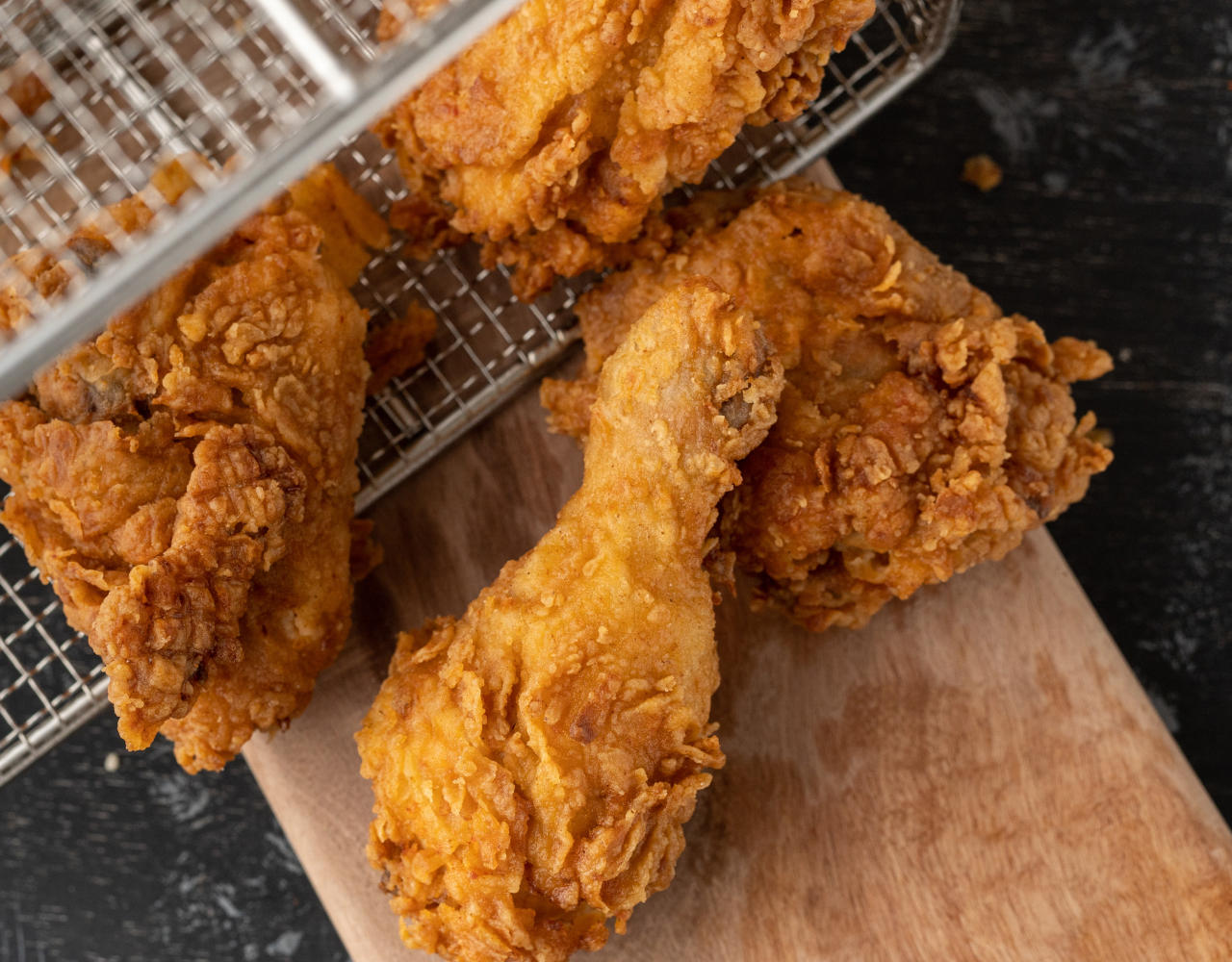 A Game Of Cluck And Chance: The Origin Story Of Fried Chicken

There's more to fried chicken than a man with a white beard and glasses. Find out how the oldest fast food in America has a somewhat chequered past…

A stereotype, a staple or a statement?

Fried chicken is one of those foods that has taken on a cultural significance far bigger than the sum of its parts.

This classic comfort food was first hatched in the British isles, then honoured in the Deep South, and soon franchised around the world.

So how did the holy meal for plantation slaves in the United States go on to spawn a university dedicated to the arts of poultry in South Korea?

The practice of cooking chicken in oil has been around since the first humans domesticated the junglefowl in South Asia millennia ago.

But if we’re talking ‘fried chicken’, like the crispy golden battered pieces we’ve all come to love, the closest early relative dates back to 18th century Scotland.

Stereotypes about British cooking were painfully true back then, as boiling was the go-to method of cooking meat at the time. But pioneering chefs had realised if they dunked their poultry in flour and cooked it in animal fat, they could transform a bland dry meal into a crispy succulent one.

But that being said - this was still far from the modern dish we now know, with its bold use of spices and flavourful meat.

Unbeknownst to the Scottish chefs who laid claim to the dish, it was the African chefs who were forcibly taken from their homelands who would give fried chicken its exalted status.

While European imports like Frankfurters and Hamburgers are often regarded as the typical ‘American’ dishes, African American slaves were influencing the cuisine of the United States for a far longer period of time.

Talented African chefs were sold into slavery in the American South, and many of them soon started working in the kitchens of their masters, ordered to make dishes that were entirely foreign to them.

Over time, they began to incorporate more of their African flavours into the dishes, and fried chicken was no exception. What was once a very plain piece of coated chicken, soon took on new life with the introduction of spices and seasonings.

While the white plantation owners could afford to eat this new meal whenever they liked, the same could not be said of the African American slaves.

Chicken was a luxury reserved for special occasions and Sundays - and as historian Jessica Harris states,  it was for this reason that chicken became known as ‘the gospel bird’.

Once slavery was abolished and African American’s started entering the work force of the South, a series of racist laws and propaganda campaigns were enacted, smearing black as lazy and unintelligent - and unfortunately fried chicken became a racialised symbol in the midst of it all.

The very food that white landowners ordered their slaves to make them, became a tool to mock the black population.

Any history of fried chicken would be incomplete without mentioning the man with the white beard and glasses, yet he may not necessarily be the figure we take him for…

Born in 1890, Harland Sanders had a frankly unremarkable life well into the age of retirement. Working on the railroad, in the docks and owning a service station, he never really found a gig that he was any good at.

That is until one day in 1952, he was cooking some food for his family in the back of his Kentucky rest stop, and a patron asked if they could try some.

News spread like wildfire about the amazing chicken and gravy made at the Sanders gas station, and Harland started making more money selling chicken than gas.

But when the interstate was built a few years later, cutting off the route to his shop, he was once again left in a lurch.

Ever the salesman, Harland decided to syndicate his recipe of ‘11 herbs and spices’ along with his own naming rights, and it wasn’t long before franchises across the country (and the world) started popping up!

He became fantastically wealthy in his later years, and it was during this time that he was bestowed the title of ‘Kentucky Colonel’ - an award given to citizens by the governor of the state (yup, we had no idea either).

A classic story of American entrepreneurship right? Well in a sense, yes.

Because the problem with this story is that, years later, claims began to surface around the source of the Colonel’s ‘11 herbs and spices’.

It’s believed that Sanders pinched this recipe from an illiterate black cook called Mrs Childress, paying her $1000. This may sound like a lot for the time, but given his empire of stores raked in billions annually - we can’t help seeing the champion of chicken as a cheat...

With the success of chains like KFC, and the proliferation of Southern cooking outside of the US, plenty of new cultures have taken the dish and put their own twist on it.

But no nation has fallen for fried foul quite like South Korea.

If you haven’t heard about the country’s obsession with fried chicken yet, this fact should hammer it home:

There are more fried chicken shops in South Korea than Mcdonalds and Subway restaurants worldwide!

This love affair started when American fried chicken made its way into the Korean mainstream in the 1970s, and since then the popularity has skyrocketed.

Over time, Korean chefs started tweaking the recipe, preferring a sweeter, crispier coating. This new variety took on a life of its own, and has now made its way back to the United States.

Today, the phrase ‘Korean fried chicken’ is searched more regularly than its Kentucky forefather, and chefs the world over are trying to learn the secrets to that perfect coating.

Some have even enrolled at the Chicken university set up by one of Korea’s largest fast food chains, ‘BBQ’!

From its troubled beginnings to its global status, Fried chicken is a truly ubiquitous food.

The status of this humble dish may not have flown to the heights it should have, but it is nonetheless a benchmark for chefs all over the world -  after all, its not too hard to make, but it takes years to master.

November 17, 2022
·
4 mins
Other Articles
The Science of Souring
Course Specific
·
7 mins
How to Make Chocolate Truffles at Home
Ideas For Home
·
2 mins
The Best Winter Plants You Can Eat
Ingredients
·
3 mins
From air drops to bus stops: How Sabich became Israeli
Course Specific
·
3 mins
Filipino Suman: A sticky snack born from the country’s staple starch
Course Specific
·
2.5 mins
Stay Connected
Thank you! Your submission has been received!
Oops! Something went wrong while submitting the form.
ABOUT US
About UsArticles
PROGRAMS
All ProgramsTeach on RassaRefer FriendsSuggest Program
SUPPORT
For BusinessesContact UsTerms of ServicePrivacy
Copyright © 2022 Rassa Technologies Limited