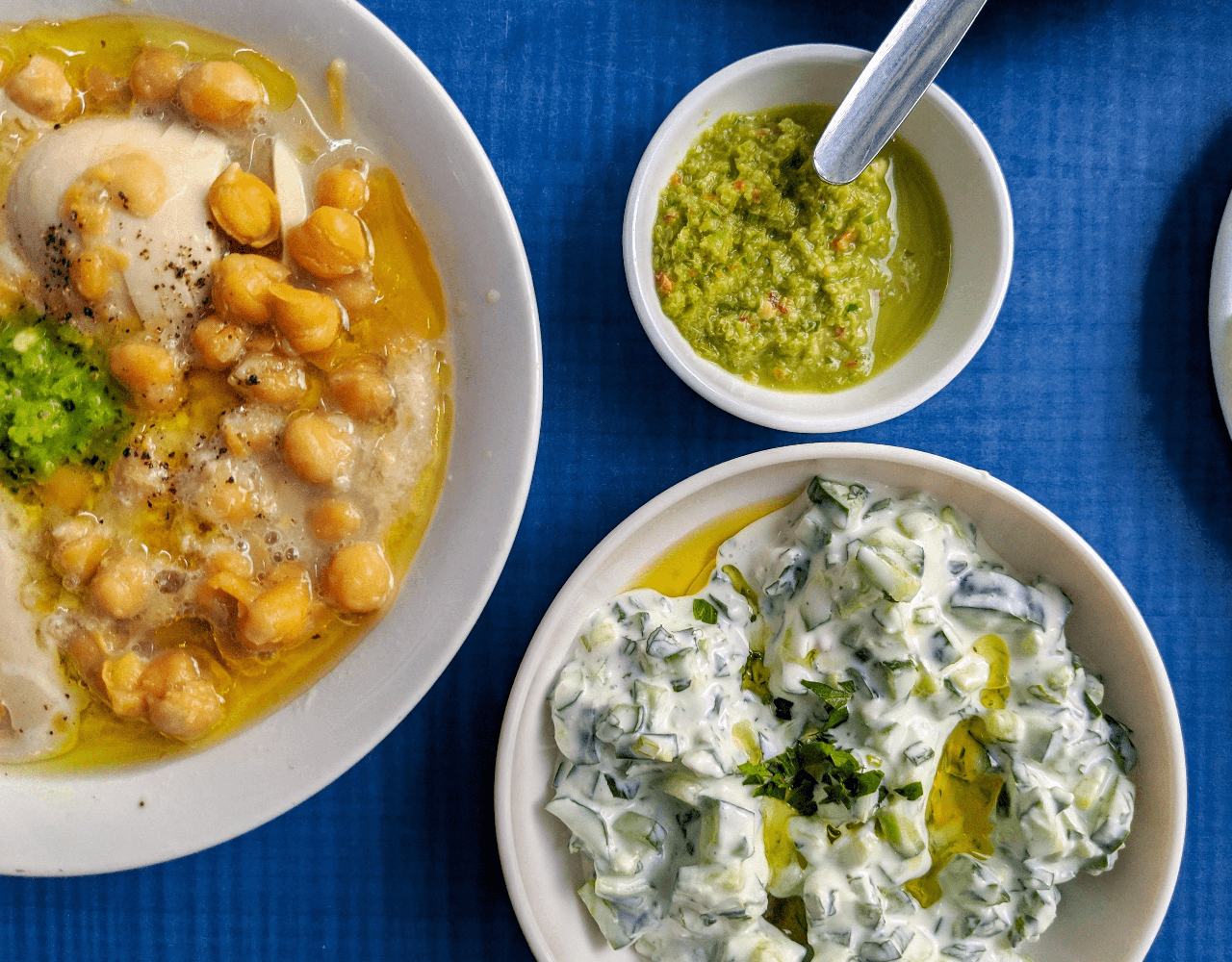 Across the Middle East, each country claims Hummus as their own. Read how the spread varies across the different regions.

If you travel through the Middle East and ask a chef from each country where Hummus originally came from, they will all give you the same answer:

As confusing as this answer may be, it might hold a little more truth than you’d think…

In Arabic, Hummus is literally the word for ‘Chickpea’, so before we start our whistle-stop tour of the Levant we need to get one thing clear. There will be no pumpkin, black bean or *gulp*… chocolate imposters here – strictly the Hummus recipes you’ll see served up across the Middle East.

Now, (and we mean this sincerely) in no particular order:

These neighbours are known for their Meze platters, bringing together a host of different dips, breads and appetisers. But the crown jewel of this Middle Eastern Smörgåsbord is the Hummus!

In Syria, Hummus Bil-Lahm is a common twist on the standard dip, served plain and topped with minced or shredded meat. Similarly in Turkey, this Meze staple is served oven dried and covered with cured beef coated in spices, called Pastirma – and no, that’s not a typo (although it is an anagram…) of Pastrami.

These meat-filled Hummus dishes are a hearty focal point of any Meze board in the region. So for all the carnivores out there who turn their nose up at the pulsed pulse, this is the Hummus for you!

Hummus is widely regarded as the unofficial national dish of Israel. Sold in specialty Hummus bars known as Hummusiyah’s, you’re never too far from a bowl of the stuff.

With a host of different recipes, Hummus Tehina is arguably the most popular in the country. This style really showcases the Tahini, making the rich sesame flavour stand out above all else.

Another Israeli take on the chickpea dip is called Jaffa Hummus. Named after the old port to the South of Tel-Aviv, this variation has nothing to do with its cake/biscuit namesake (another debate we will avoid for now). Rather, it is known for its lightly whipped creamy texture and nutty flavour.

One of the largest Jewish groups outside of Israel is the Mizrahi of Iraq. But just because they hail from a different country, this doesn’t mean they love the beige stuff any less!

This group of Iraqi Jews is known for combining their Hummus with various toppings such as fried aubergine and boiled eggs. Just when we thought the dip had too much colour eh….

The Egyptian take on Hummus may cause a bit of contention, as it actually features Hummus’ big rival in the region.

Fūl Medames is made by stewing fava beans in onions, cumin and other spices, and is a common dip in the kitchens of Cairo. With it’s very own hieroglyph, this ancient meal originated centuries ago in the bathhouses of Cairo.

It is said huge vats of beans were heated over the fires used to heat the boilers once the bathhouse closed each night. This obscure piece of history is where the fava beans earn their Egyptian name – Fūl Hammam or “bath bean” (yum)

You will find this archaic stew served as a topping for your bowl of hummus in restaurants and markets across Egypt. With an added savoury tang, this stewed dish is a great take on the chickpea classic.

Hummus in the west occupies a familiar space – that space being somewhere in the refrigerated dips aisle, nestled in between the chilled guacamole and taramasalata.

However, in Palestine and Jordan, Hummus is commonly eaten warm. Served for any meal of the day, this dish takes on a new dimension when fresh. Once the chickpeas have been cooked, the warm dip is consumed immediately and takes on the role of a main rather than a side.

In 2008, the association of Lebanese Industrialists petitioned the EU to recognize Hummus as a uniquely Lebanese dish. I wouldn’t hold your breath if I were you guys…

But besides a few overly zealous businessmen, Lebanese chefs are letting the food do the talking, and laying claim to the dish through a host of delicious variations.

One of the most beloved in the country is Laban’ma Hummus, which also shares its roots in Palestine and Jordan. This multilayered dish consists of shingled pieces of flatbread or pita mixed into the hummus and topped with yoghurt, garlic, lemon juice and pine nuts.

August 10, 2022
·
3.5 mins
Other Articles
Eight Legged Eats: Why We Don't Eat Insects And Why We Might Start
Ingredients
·
3.5 mins
Thinking Outside The Lunchbox: The 130 Year Old Delivery Service Feeding Mumbai
Food Cultures
·
2.5 mins
"I Couldn't Just Have A Seat At The Table, I Had To Own The Table": Alexander Smalls On His Appetite For Life
Interviews
·
5 mins
Rassa Christmas Gift Guide: Top 10 Gifts For The Homecook
Ideas For Home
·
4 mins
The meat lover’s guide to eating just a little bit less meat
Ideas For Home
·
8 mins
Stay Connected
Thank you! Your submission has been received!
Oops! Something went wrong while submitting the form.
ABOUT US
About UsArticles
PROGRAMS
All ProgramsTeach on RassaRefer FriendsSuggest Program
SUPPORT
For BusinessesContact UsTerms of ServicePrivacy
Copyright © 2022 Rassa Technologies Limited