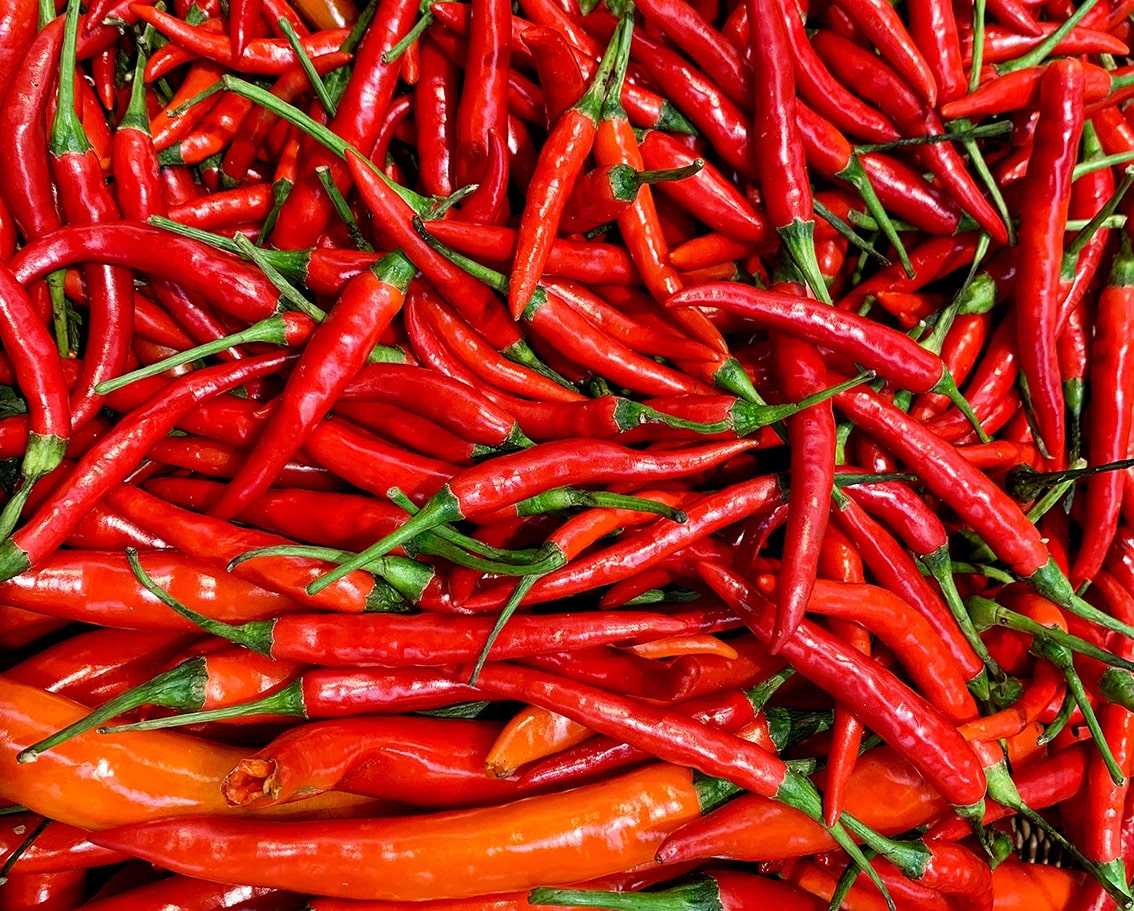 What is the hottest chilli pepper? What is the history of spicy food? Why does spice burn? Read on to learn more about the human obsession with spicy food.

Whether it’s a Sichuan hot pot, Chilli Laksa or plate of hot wings, many of us have asked the same question while wiping away tears and blowing noses:

Why god? Why do we eat spicy food?

Well the answer isn’t immediately obvious. Science can only take us so far when working out why some enjoy spicy food, and others blow their top.

So let’s have a look at what is actually happening in our mouths, why we keep going back for more, and what is a Scoville really?

First, there are two types of “spiciness”:

The first type takes its explosive capabilities from a chemical compound called myrosinase. Now before we give any of you Vietnam flashbacks to science class, this is basically just a defence mechanism for when plant cells are crushed.

The first type is potent, but it doesn’t pack as big a punch as the second type - the chilli’s main weapon is Capsaicin.

Capsaicin is more like an irritant which interacts with the pain receptors in the mouth, skin or... really any other part of the body (yes, even there).

When Capsaicin reacts with these receptors, they send messages to the brain which are almost identical to those that are sent when you burn your mouth - in other words, you are literally feeling the burn!

An even stranger reaction from the body is the release of dopamine and endorphins in the brain. This reaction is so powerful that people can even feel a sensation of euphoria while eating very hot chillies, similar to a runner's high!

Is Spice a Flavor?

Spice is not a flavor like saltiness or sweetness, as it is our pain receptors, not our taste buds which react to the fiery chemical.

What Is the History of Spicy Food?

There are plenty of theories to chew on as to why our ancestors first tormented their tongues with spicy food.

Some claim it’s because ancient cultures needed to come up with inventive ways of preserving meat.

As far back as ancient Egypt, we know that societies have used mustard to extend the shelf life of their animal products. Archaeologists believe the taste of the spoilt meat was overpowered by the spicy coating, but there might be a little more sense to it than just masking a nasty odour.

Both Capsaicin and myrosinase have antibacterial properties and allowed the meat to be stored for longer periods of time without rotting. Mustard came to be such an important product that it was even buried with a number of Egyptian pharaohs!

Whether they were trying to make jerky out of their royalty or not - that’s up for you to decide. However, one fact universally agreed upon is that spicy food is generally more popular the closer to the equator you live, and the hotter the climate is.

Experts have argued that this penchant for spice in hot countries became part of the culture because of the body’s response to spicy food.

Alongside the burning sensation in the mouth, nose and throat, capsaicin is known to produce a raised body temperature, flushing of the skin and profuse sweating - and while it may not sound pleasant, all these responses help cool down the body.

Which Country Likes Spicy Food the Most?

Spicy food may seem like it’s everywhere these days, but it wasn’t long ago that chillies were still only found in their native central America.

Colonisers crossed the Atlantic and started harvesting the seeds they found in the “New World”. When they returned to Europe they traded these spicy fruits and new variants of the Capsicum plant began cropping up around the globe.

Today, cultures from Korea to the Caribbean have made spicy peppers central to the identity of their cuisine.

Thai cuisine has become infamous for the amount of chilli used in everyday cooking. The bird’s eye chilli, or Prik I Noo Suan is a common ingredient in curries, fried dishes, and even as a topping served in vinegar.

In Jamaica, spice can only mean one thing - Scotch Bonnet peppers. These orange lantern shaped chillies pack a serious punch, and are a key ingredient when making Jamaica’s world famous Jerk chicken. If you’re not scared off by the spice, you’ll be rewarded by the fruity floral flavours of this delicious chilli.

Malaysia is another nation that couldn’t get enough of the hot stuff. Heavily influenced by Indian and Chinese cooking, the cuisine of the island nation uses both fresh and dried chillies liberally. Spicy soups like Laksa will catch the back of your throat if you’re not careful, and you’ll definitely feel the burn when eating the spicy fish cakes known as Otak Otak.

What is the spiciest chilli in the world?

Before we go ranking chillies by spiciness, we need to get one thing straight:

What is the Scoville Scale?

The Scoville scale is worked out by the amount of sugar-water needed to dilute the chilli before you can no longer detect any spice - put simply, the higher the number of Scovilles, the spicier the pepper.

But for some people, this just isn’t enough…

From the year 2000 up until 2014, the market for hot sauce grew 150%, and with this appetite for spice growing larger each year, botanists like Ed Currie of South Carolina started experimenting with new breeds of chilli.

With a whopping 2.2 million Scovilles to its name, the Carolina Reaper is the hottest pepper on record and has spawned countless internet challenges, hot sauce flavours and ruined meals.

What Is Pepper Spray on the Scoville Scale?

Security grade pepper spray used by the United States’ police has somewhere between 2 million and 5 million Scoville units, which puts the Carolina Reaper into perspective!

Currie hasn't rested on his fiery laurels for long. While no official tests have confirmed it yet, he claims to have created an even hotter chilli. Known as 'Pepper X', this crime against nature is said to contain double the amount of Capsaicin as a Carolina Reaper...

We might need a glass of milk just thinking about it...

November 17, 2022
·
4 mins
Other Articles
What exactly is Intuitive Cooking?
Techniques
·
6 mins
The Emerald Tide: Ireland's Rekindled Love Affair With Seaweed
Course Specific
·
3 mins
Flavoured Fire: Get the most out of smoking fish & meats
Course Specific
·
2.5 mins
The meat lover’s guide to eating just a little bit less meat
Ideas For Home
·
8 mins
Conversations with a World Central Kitchen volunteer in Ukraine
Interviews
·
4 mins
Stay Connected
Thank you! Your submission has been received!
Oops! Something went wrong while submitting the form.
ABOUT US
About UsArticles
PROGRAMS
All ProgramsTeach on RassaRefer FriendsSuggest Program
SUPPORT
For BusinessesContact UsTerms of ServicePrivacy
Copyright © 2022 Rassa Technologies Limited